Trump VS Clinton: Who Won the Debate? 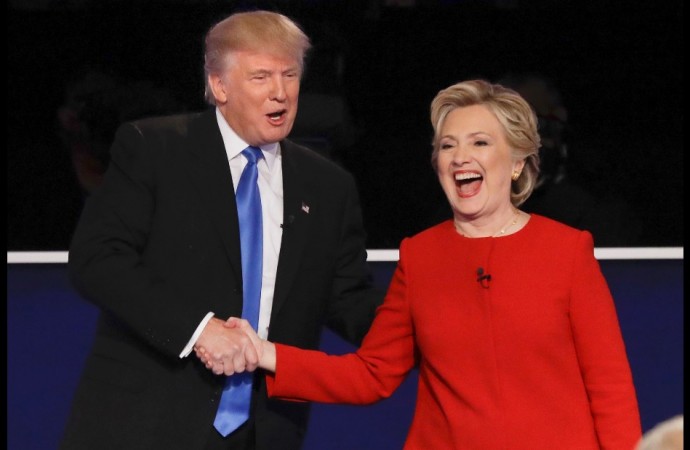 Last night’s debate was a complete and utter circus. But amidst the chaos there was a debate, and like with all debates there is always a winner. The vast majority of political analysts have weighed in and unanimously declared Hillary Clinton the winner of last night’s debate. There is however a caveat. Just because Clinton

Last night’s debate was a complete and utter circus. But amidst the chaos there was a debate, and like with all debates there is always a winner. The vast majority of political analysts have weighed in and unanimously declared Hillary Clinton the winner of last night’s debate. There is however a caveat. Just because Clinton won the debate doesn’t mean she’ll win the election. The same analysts that said Clinton won also said that what will win this election is more on charisma and fervent support. In that regard, Trump still has a strong chance at winning this election.

The two are as polar opposites as you can possibly get. Clinton was very smart and blasted Trump with well thought out arguments. But Clinton also had some trouble relating to the voters and didn’t get much of a reaction. Whereas Trump went in guns blazing like he normally does. With some fancy buzzwords he continuously hammered his points to the voters and ultimately won over the crowd and had them cheering at a non cheering event. At this point, the name of the game is grab all the undecideds. If Clinton got any undecideds last night, it wasn’t because of her dazzling rhetoric, it’s probably just because they didn’t like Trump. In that sense, Trump is taking the initiative and making all the power moves.

As political analyst S.E. Cupp said, “Hillary Clinton had one job. She had to make Donald Trump look dumb.” Many people might say that she accomplished her goal but others would disagree. Yes, Clinton exposed Trump for the braggadocious and unprepared businessman that he is, but she failed to put any nails in his coffin. He evaded and deflected like he always has and Clinton just couldn’t corner him the way that she wanted to. In contrast, Trump was able to make his point that Clinton is just another politician that the voters were already tired of. You could see that Clinton had a lot of trouble defending against and poking holes in his logic. Almost like fighting a child who thinks they know everything, Clinton was helpless in that sense.

The difficulty of arguing against Donald Trump could be exemplified in one exchange. Clinton made the very smart move to force a call to action on Trump by asking him to release his tax returns. Everyone running for president in the last 40 years has released their tax returns. She reasoned that the reason why he wasn’t releasing them was because he didn’t want the voters to know if he had any hidden agendas or maybe that he wasn’t paying any taxes. Trump turned it right back on Clinton and said he would release his tax returns if she would release her deleted emails. The two are apples and oranges, yet Trump turned a defensive move into an offensive move.

Clinton even had a fact checker going on her website to double check every little thing Trump was saying, knowing that he likes to fudge or sidestep the facts. Did that work in her favor? It might have, but he definitely didn’t have the effect that she wanted. All in all, Trump seemed to control the debate despite his outrage this morning. He claimed his microphone was faulty and blamed the moderator, Lester Holt, for being bias. The only thing we know for sure is that last night’s debate was the highest viewed debate in the 60 years that presidential debates have been televised. Over 81 million people tuned in for the chaos. It certainly seems like Trump regardless of good or bad, is making people care about politics.