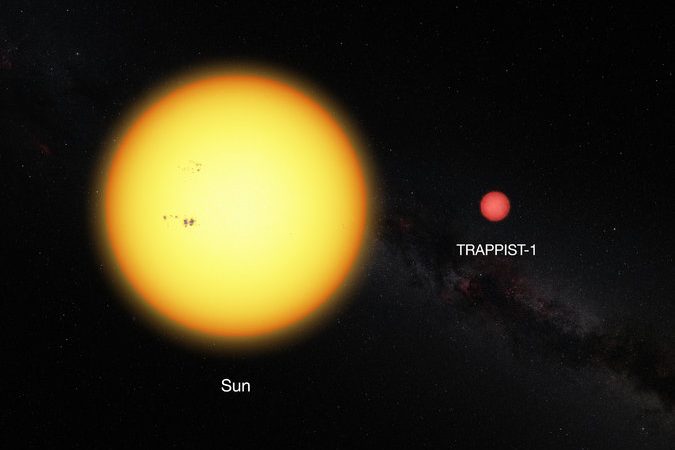 NASA has just held a press conference that clarified their earlier announcement but left us with more questions than we started with. NASA announced that they have discovered seven planets that are close in size to Earth only 40 light years away. This is the first time we’ve been able to discover this many potentially

NASA has just held a press conference that clarified their earlier announcement but left us with more questions than we started with. NASA announced that they have discovered seven planets that are close in size to Earth only 40 light years away. This is the first time we’ve been able to discover this many potentially habitable and Earth-like planets in one star system before. The star system was originally discovered a year ago by a Chilean robotic telescope in the Atacama Desert. But due to incomplete data, it was previously believed to only have three planets. It wasn’t until NASA sent the Spitzer satellite to investigate that they discovered there were actually seven planets. 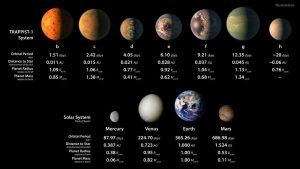 But what makes these these planets so special? For one thing, it’s the star they’re orbiting that is partially helpful. Normally, stars would be too bright for us to notice Earth sized planets but the Trappist star is an “ultracool dwarf” star which is only one twelfth the size of our own sun (similar in size to Jupiter) and only burns with a surface temperature of 4,150 degrees fahrenheit compared to our own sun’s 10,000 degrees fahrenheit. The seven planets also orbit much closer to their star than we do our own. If these planets were in our solar system, all seven would fit neatly in Mercury’s orbit. Due to their close proximity to each other and their star, that means there are three planets that occupy the “habitable zone.” That is the zone that scientists describe as just the right distance for liquid water to exist as well as a survivable temperature by this planet’s standards. 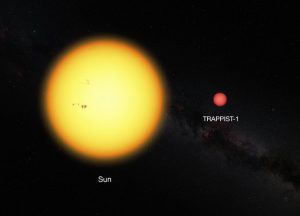 But one unique trait likely shared by all the planets is that they are tidally locked. Another result of their close proximity is that they do not rotate like Earth which means half the planets will always have day and the other half always has night. This unique trait means that under the right conditions like atmospheric composition, any of these planets have the possibility of having liquid water. Furthermore, NASA has determined that the two planets closest to the star are rocky planets as opposed to gas planets like Jupiter and Saturn. It is also believed that the rest are rocky planets as well. NASA still has to identify their atmospheric composition but if they are the right mixture of oxygen, ozone, carbon dioxide and methane then that “would tell us there is life with 99 percent confidence,” according to Dr. Gillon.

So all that brings us to the big questions. Does that mean this is another Earth that we can colonize? More data needs to be collected but there is a high probability that at least a few of these planets will be similar enough to Earth to colonize one day. But the problem is they are just under 40 light years away. That means, even if we had ships that could travel at or near the speed of light it would still take 40 years to get there. With the technology we currently have, it would potentially take millions of years to reach these planets. The fastest recorded speed of any man made object is currently 165,000 miles per hour set by the Juno spacecraft and that was only after multiple gravity boost assists. Even at that speed it would still take hundreds of thousands of years to reach Trappist. Sobering news for any hopeful space colonist.

The other big question is, where are the aliens? With planets as close to Earth as these planets are, one would expect intelligent beings to be roaming around. Unfortunately that isn’t really the case for Trappist. “If you’re looking for complex biology, intelligent aliens that might take a long time to evolve from pond scum, older could be better,” said Seth Shostak, an astronomer at the Seti Institute in Mountain View, Calif. “It seems a good bet that the majority of clever beings populating the universe look up to see a dim, reddish sun hanging in their sky. And at least they wouldn’t have to worry about sun block.” Which means the Trappist system is simply too young to have the kind of aliens in science fiction movies. Our best bet are much older star systems with similar but much older planets.

NASA also made a much shorter and simpler video.