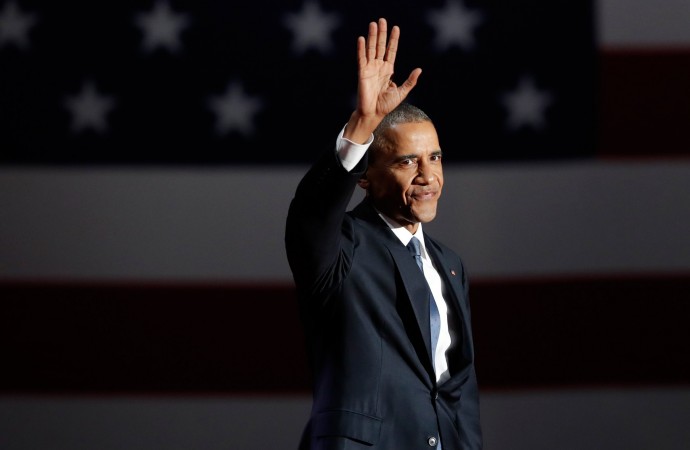 Soon to be former President Barack Obama gave his farewell address Tuesday night. That speech was the last speech Obama will give as president as he will leave office in 9 days to make way for President-Elect Donald Trump. In his farewell address, he was insistent that he wants a smooth transition from his administration

Soon to be former President Barack Obama gave his farewell address Tuesday night. That speech was the last speech Obama will give as president as he will leave office in 9 days to make way for President-Elect Donald Trump. In his farewell address, he was insistent that he wants a smooth transition from his administration to the new one. But even in the face of peaceful transition, he rebuked many points throughout his speech that Trump built his platform on such as race equality, climate change, health care and international diplomacy.

In reference to the new administration’s attempts to bring down “Obamacare” he said, “If anyone can put together a plan that is demonstrably better than the improvements we’ve made to our health care system — that covers as many people at less cost — I will publicly support it.”

He warned that what this nation needs now, more than ever is solidarity. “Democracy does not require uniformity,” Obama said. “Our founders quarreled and compromised, and expected us to do the same. But they knew that democracy does require a basic sense of solidarity — the idea that for all our outward differences, we are all in this together; that we rise or fall as one.”

Solidarity is important but he also warned that democrats shouldn’t fall in line as if resigning to a new regime. “Democracy can buckle when we give in to fear,” he said. “So just as we, as citizens, must remain vigilant against external aggression, we must guard against a weakening of the values that make us who we are.” It is the right of every citizen and every human who lives in this country to voice their opinions without fear of reprisal.

“If every economic issue is framed as a struggle between a hard working white middle class and undeserving minorities,” Obama said, “then workers of all shades will be left fighting for scraps while the wealthy withdraw further into their private enclave.”

“If we decline to invest in the children of immigrants, just because they don’t look like us, we diminish the prospects of our own children — because those brown kids will represent a larger share of America’s workforce,” he added.

In addition to wise words he also made sure to highlight some of the accomplishments of his time in office. From taking down Osama Bin Laden to recovering from recession, he clearly stated “By almost every measure, America is a better, stronger place than it was when we started.”

He finished his moving speech by quoting the mantra of his winning campaign “Yes we can” quickly followed by “yes we did.”

In case you missed the farewell speech, here is the full video: