What You Need to Know About Donald Trump’s Inauguration 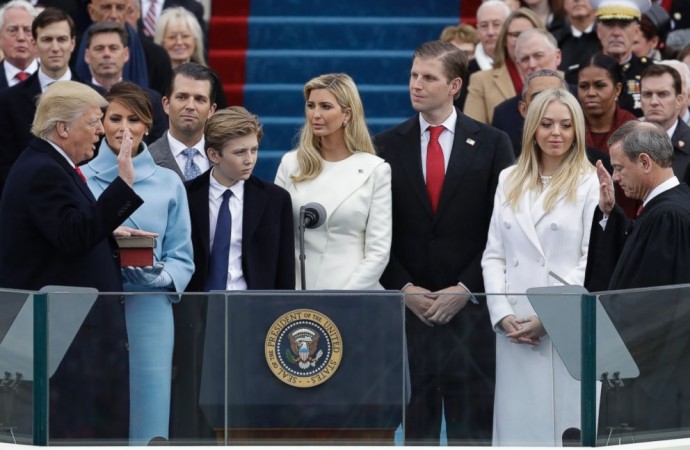 It’s now official, despite the massive opposition and countless rallies against him, Donald Trump is now the 45th President of the United States of America. The day began with Trump and his family visiting The White House as the Obamas were leaving. Melania Trump hands Michelle Obama what appears to be a Tiffany & Co.

It’s now official, despite the massive opposition and countless rallies against him, Donald Trump is now the 45th President of the United States of America.

The day began with Trump and his family visiting The White House as the Obamas were leaving. Melania Trump hands Michelle Obama what appears to be a Tiffany & Co. Box leaving an air of mystery around the box. Melania herself was dressed in a blue conservative dress that is reminiscent of Jackie Kennedy on the inauguration day of JFK.

Hillary Clinton, the woman who won almost 3 million more popular votes than Donald Trump was also on hand for the inauguration. Clinton, like former President Obama, wishes to have a peaceful transition of power in these turbulent political times.

Hillary Clinton and Pres. Clinton have just arrived for the Inauguration. https://t.co/MnoJqnNO2P

Unfortunately, some individuals took it upon themselves to chant “Lock her up.” Followed by, “Trump, Trump, Trump.”

Those that attended the inauguration was not record breaking. But there were many Trump supporters that weren’t in the mall with the masses.

According to the New York Times, Donald Trump’s inauguration is estimated to cost over $200 million dollars. Roughly $90 million dollars has been donated by private benefactors like Boeing but most of the donors are being kept secret. Tickets for the inauguration dinner were bought for up to $1 million dollars. Why so expensive? The main concern is safety. With so many people unhappy with the election results it is expected that there will be more resistance than usual and even some attempts at the safety of the President-Elect.

Trump was especially religious which is very uncharacteristic of him. He went to St. John’s Episcopal Church as many Presidents do on their inauguration day. But he also had six clergy members with him at the actual ceremony which is the highest in history. Most Presidents have one or two members of clergy with them and the record holder being Richard Nixon with five, but Trump is determined to make himself stand out by breaking that record. A history professor at Harvard University, Kevin Kruse said, The sheer size is unusual, it’s an effort to not just elevate the tone of Mr. Trump’s inauguration, but to elevate him.”

The overall tone of the country is still chaotic and divisive. In Washington D.C. riots took place and people took to the streets smashing business and bank windows.

Starbucks vandalized at 13th and I. pic.twitter.com/Lvufm8PBui

Scientists and hacker groups from all over the country rally together to try to save as much data regarding climate change and other things Trump’s administration doesn’t believe in.

Perhaps one of the biggest stories to note is the protest that took place in New York City just hours before the inauguration. Roughly 25,000 people turned up in the middle of the street in an event organized by moveon.org. Dozens of prominent figures and celebrities like Alec Baldwin, Robert De Niro, Mark Ruffalo, Cher and mayor Bill de Blasio. They encouraged what they called 100 days of resistance which is a call to action against the Trump administration.

Video of the protest in NYC.