Belgium faces a horrible nightmare after months on high alert. The terrorist organization ISIS claims responsibility for the two bombings in Brussels, one in an airport and the other in a subway station. The attacks left 34 people dead and almost 200 people severely wounded. The city’s mayor said to the press, “Hate and extremism

Belgium faces a horrible nightmare after months on high alert. The terrorist organization ISIS claims responsibility for the two bombings in Brussels, one in an airport and the other in a subway station. The attacks left 34 people dead and almost 200 people severely wounded. The city’s mayor said to the press, “Hate and extremism have hit in Brussels, This is an attack against the values of freedom and democracy, against the humanism that we value so much in Brussels.” With the attack on Paris just a few months old and still seared into our minds, the global community once again mourns for the victims of terror.

THE ATTACKS
Just after 8 A.M. on Tuesday the 22nd, two suicide bombers set of several massive explosions that destroyed a departure hall in Brussels Airport. At least 14 people were found dead and more than 80 people were left severely injured.

While emergency services were diverted to deal with the first attack, another bomb was detonated in Brussels’ Maalbeek station at 9 A.M. ISIS claims that a suicide bomber opened fire in the metro station and then detonated but Belgian officials do not believe a suicide bomber was responsible for the explosion, instead a planted explosive.

BELGIUM WOEFULLY UNPREPARED
Belgium was on high terrorist alert after the events that unfolded in Paris just last November. Experts already realized that Belgium was a likely target due to lack of a cohesive government. The country also has large areas of French, German, and Flemish speaking people which is an attractive target for terrorists to cause maximum chaos due to language barriers. Furthermore, Brussels has 6 different police districts which answer to 19 different municipal mayors. This infrastructure would cause mass chaos in the event of a terrorist attack. Belgium is also known for political infighting and a fractured government which all contributed to being unable to stop this attack.

Belgian Prime Minister Charles Michel said, “We are determined to defend our freedom,” while he announced a three day national mourning period. The Brussels intelligence agency is redoubling efforts to better detect and prevent future attacks. Our hearts go out to all the people who are fighting for their lives and their loved ones as well as those who lost their lives. 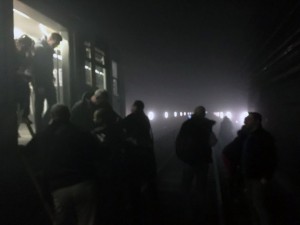 In this photo provided by EurActiv and photographed by Evan Lamos, passengers on the metro leave their carriages and walk along the tracks following an attack on the Brussels underground transport system in Brussels, Belgium, after an explosion, Tuesday, March 22, 2016. Scores of people are dead after explosions hit Brussels airport and the city’s Maelbeek metro station Tuesday morning. (Evan Lamos/EurActiv, via AP) 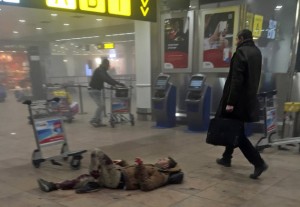 In this photo provided by Georgian Public Broadcaster and photographed by Ketevan Kardava, an injured man lies on the floor in Brussels Airport in Brussels, Belgium, after explosions were heard Tuesday, March 22, 2016. A developing situation left a number dead in explosions that ripped through the departure hall at Brussels airport Tuesday, police said. All flights were canceled, arriving planes were being diverted and Belgium’s terror alert level was raised to maximum, officials said. (Ketevan Kardava/ Georgian Public Broadcaster via AP)